“He bore the sin of many, and made intercession for the transgressors.” Isaiah 53:12 (NKJV)

The significance of Yom Kippur

Tonight marks the beginning of the holiest Jewish Holiday, Yom Kippur – Atonement Day. It was on Yom Kippur when the High Priest, this one time a year, enter into the Holy of Holies to make atonement before the mercy seat – the Arc of the Covenant. Isaiah chapter 53 explains how Yom Kippur would one day find its fulfilment in the Messiah. 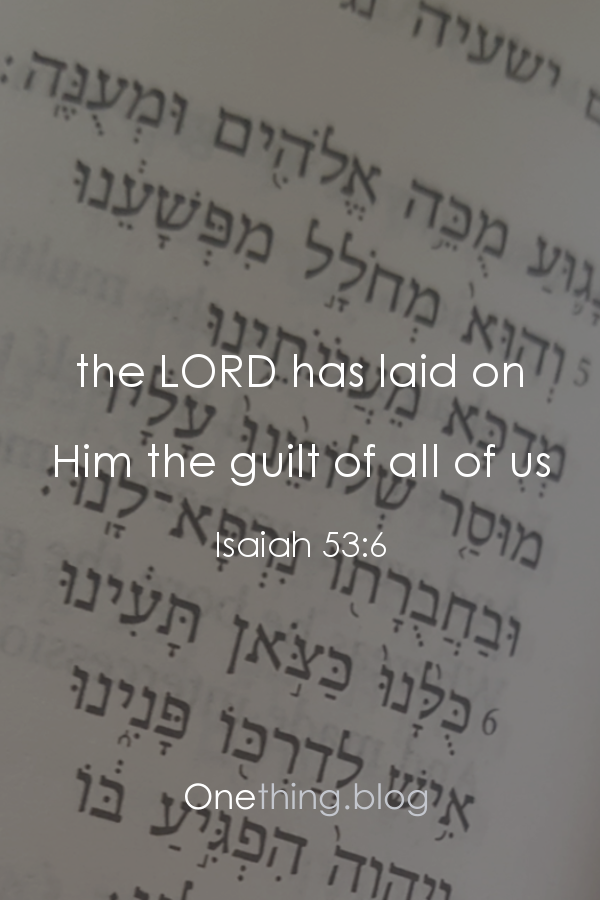 Each year on Yom Kippur, the High Priest chose two goats, one to symbolically carry the sins of the people into the wilderness, the other to be sacrificed on the altar to pacify God’s wrath over sin. He then entered the Holy of Holies of the Tabernacle (later on the Temple in Jerusalem) and interceded before the Ark of the Covenant for his people for God to have mercy (read more in Leviticus 16).

About 1400 years after the Israelites celebrated the first Yom Kippur in the wilderness, Yeshua, who was without sin, became the true scapegoat, carrying the sin of the people – us – and putting sin to death when He gave His life on the cross.

And this is not all: since his resurrection from the dead and ascension to Heaven, Yeshua now is the true and eternal High Priest interceding on our behalf before the throne of His Father, the eternal Holy of Holies.

Yeshua – The perfect Lamb of God

One popular prayer recited on Yom Kippur (and the Ten Days of Awe preceding it) is Psalm 51: “Have mercy upon me, O God, according to thy lovingkindness: according unto the multitude of thy tender mercies blot out my transgressions.” (KJV)

King David knew that forgiveness of sin always has been and always will be founded on God’s mercy and unfailing love. When was caught in adultery, David didn’t have some bulls slaughtered, instead he pleaded for God’s mercy!

Never could the blood of lambs and bulls, or a goat sent into the wilderness, take away sin. These were but an image of the perfect Lamb of God, who would take on Himself the sins of the world (Isaiah 53:5 &11).

It is this Lamb’s blood which God sees when He forgives sin, both King David’s and ours, moving His heart to have compassion on us.

Read what Isaiah foretold about Yeshua’s suffering and its significance for us:

1 Who hath believed our report? and to whom is the arm of the LORD revealed

2 For he shall grow up before him as a tender plant, and as a root out of a dry ground: he hath no form nor comeliness; and when we shall see him, there is no beauty that we should desire him.

3 He is despised and rejected of men; a man of sorrows, and acquainted with grief: and we hid as it were our faces from him; he was despised, and we esteemed him not.

4 Surely he hath borne our griefs, and carried our sorrows: yet we did esteem him stricken, smitten of God, and afflicted.

5 But he was wounded for our transgressions, he was bruised for our iniquities: the chastisement of our peace was upon him; and with his stripes we are healed.

6 All we like sheep have gone astray; we have turned every one to his own way; and the LORD hath laid on him the iniquity of us all.

7 He was oppressed, and he was afflicted, yet he opened not his mouth: he is brought as a lamb to the slaughter, and as a sheep before her shearers is dumb, so he openeth not his mouth.

8 He was taken from prison and from judgment: and who shall declare his generation? for he was cut off out of the land of the living: for the transgression of my people was he stricken.

9 And he made his grave with the wicked, and with the rich in his death; because he had done no violence, neither was any deceit in his mouth.

10 Yet it pleased the LORD to bruise him; he hath put him to grief: when thou shalt make his soul an offering for sin, he shall see his seed, he shall prolong his days, and the pleasure of the LORD shall prosper in his hand.

11 He shall see of the travail of his soul, and shall be satisfied: by his knowledge shall my righteous servant justify many; for he shall bear their iniquities.

12 Therefore will I divide him a portion with the great, and he shall divide the spoil with the strong; because he hath poured out his soul unto death: and he was numbered with the transgressors; and he bare the sin of many, and made intercession for the transgressors.

May the LORD, the Holy One of Israel, bless you this Yom Kippur and be gracious to you!

1 thought on “Yom Kippur: He bore the sins of many.”