“Behold, the days are coming, declares the LORD, when I will make a new covenant with the house of Israel and with the house of Judah… I will put My law in their minds and inscribe it on their hearts. And I will be their God, and they will be My people.” Jeremiah 31:31-33 (BSB)

What are Pentecost and Shavuot?

On this Day of Pentecost, let’s look at the meaning of Shavuot. Shavuot is the biblical feast that the Apostles, together with and all Israel, celebrated on that day when the Holy Spirit was poured out in Jerusalem. Shavuot (a Hebrew word meaning “weeks”) is of particular importance for Christians. For about 1400 years, it had pointed to a day in the future, when God would pour out this Holy Spirit on both Jews and Gentiles.

Shavuot is celebrated on the 50th day after the Feast of Firstfruits (the Greek “Pentecost” meaning “fiftieth”). Together with Pesach (Passover) and Sukkot (the Feast of Tabernacles), Shavuot is one of the three annual “holy convocations”: the three pilgrimage festivals when every male Israelite had to present himself before the Lord at the Temple in Jerusalem (Exodus 23:14-17). 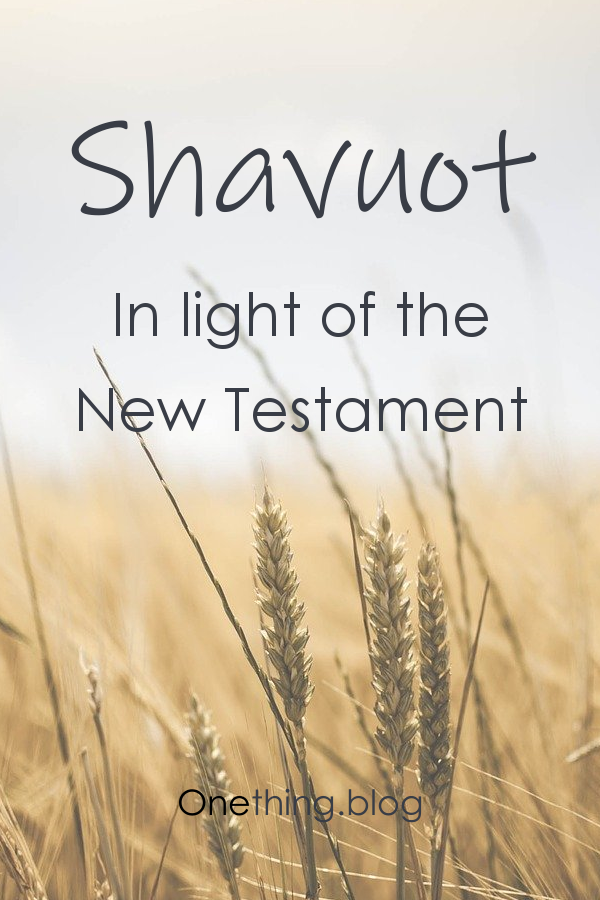 The first Shavuot: The giving of the Law

On the very first Shavuot, over 3.000 years ago, something extraordinary took place. According to tradition, the fiftieth day after Israel’s deliverance from slavery in Egypt coincided with the giving of the Torah, the Mosaic Law (the Bible hints at this in Exodus 19:1). God came down on Mount Sinai (Exodus 19) and entered into a covenant with Israel. Israel, the Jewish people, became the first – and remains until today the only – nation which God calls his very own people, his “special treasure” (Exodus 19:5), a kingdom of priests and a holy nation (V.6).

The promise of a new covenant

The day that Israel received the Law at Mount Sinai mirrored an event that was to come in the future. As the Israelites experienced throughout the generations, any person trying to live by the Mosaic Law would fail. Not because the Mosaic Law was flawed – the Law certainly was perfect! (Romans 7:12). But, as Paul put it in Romans 8:3, “The law was powerless to save because it was weakened by the flesh” – our sinful human nature made it impossible for the Law to make us righteous.

Therefore, the Mosaic Law was not God’s final word. Centuries after the giving of the Law at Mount Sinai, God promised He would make a new covenant and impart His Law in a new, more substantial way. He declared through the prophets Jeremiah and Ezekiel:

“Behold, the days are coming, declares the LORD, when I will make a new covenant with the house of Israel and with the house of Judah. It will not be like the covenant I made with their fathers when I took them by the hand to lead them out of the land of Egypt—a covenant they broke, though I was a husband to them. … I will put My law in their minds and inscribe it on their hearts. And I will be their God, and they will be My people.” Jeremiah 31:31-33 (BSB)

“I will put My Spirit within you and cause you to walk in My statutes, and you will keep My judgments and do them.” Ezekiel 36:27 (NKJV)

The second Shavuot: The Holy Spirit

God began to fulfill these prophecies of Jeremiah and Ezekiel on the Day of Shavuot (Pentecost) that was celebrated 50 days after Jesus’ resurrection: God poured out his Holy Spirit on the 120 who had gathered in the Upper Room. This was how God inscribed his Law in their hearts. From then onward, the disciples were to follow and obey the leading and prompting of the Holy Spirit and so, day by day, slowly but surely, learn to walk in God’s eternal statutes. This was the seal of God’s new covenant.

Salvation for the Gentiles prophesied

“And afterward, I will pour out my Spirit on all people…before the coming of the great and dreadful day of the LORD. And everyone who calls on the name of the LORD will be saved; for on Mount Zion and in Jerusalem there will be deliverance….” Joel 2:28-32, NIV

“All people” means Jews and Gentiles alike will receive the Holy Spirit – and therefore partake in this new covenant Jeremiah spoke about. And “everyone” who calls on the Lord will be saved, means everyone – also the Gentiles will find salvation on Mount Zion.

Shavuot therefore points towards a new covenant which is extended to Jews as well as Gentiles, the nations who are not God’s chosen people Israel.

2.000 years of Christianity can make us forget how outrageous this was in the days of the Bible. Luke records how both Jesus and the Apostle Paul caused uproar when they proclaimed that God would extend his grace to the Gentiles (Luke 4:28 and Acts 22:21). Back then, Gentiles were what Christians nowadays call “the world” – and much worse. Outside of Israel, blatant sin was raging: idol worship, child sacrifice, temple prostitution, no regard for human life.

Ever since the Babylonian exile, the Jewish people had at great pains fought off any pagan influence. For that, many Jews had paid with their life. The idea that God would enter a covenant with these horrendous pagans was just beyond what a God-fearing Jew could imagine.

The story of Ruth: A Gentile grafted into Israel

Yet this is what the prophets had spoken of. And throughout Israel’s history, God had accepted Gentiles to become part of his covenant people.

It is no coincidence that one tradition of Shavuot is to read the book of Ruth in synagogues around the world. The story of Ruth who gleans the fields of Boaz takes place in the time of Shavuot. Ruth, a Moabite Gentile, followed her mother-in-law Naomi, a Jew, to Israel. On her way there, Ruth confesses her faith in the true and living God, the God of Israel: “Your God shall be my God” (Ruth 1:16). Later on, Ruth marries Boaz, her kinsman-redeemer and she irrevocably becomes part of God’s people. From her lineage David, Israel’s greatest king, would be born.

Meaning of Ruth: Salvation is from the Jews

The book of Ruth points to the great calling of the Jewish people which is to be a kingdom of priests and a light unto the nations. God himself is the only Saviour and Redeemer. And He chose the Jewish people to make Him known, so the whole world can find their salvation in Him.

Naomi was such a light to Ruth when she led her to the God of Israel and his people. Ruth “called on the name of the Lord” and found “deliverance on Mount Zion” – in the God of Israel. She personally experienced that “Salvation is from the Jews” (John 4:22). Also we received Salvation through Yeshua, the Jewish Messiah, who bought our freedom in Jerusalem.

The Holy Spirit is the Law in our hearts

Shavuot also has a meaning in our personal walk with God. We too need to experience the outpouring of the Holy Spirit. The Holy Spirit is the law inscribed in our hearts – he leads us into all truth. We are called to follow the Holy Spirit’s leading and obey him in all areas of our life. From the inside out, he changes us into the likeness of Christ – if we submit and obey him. 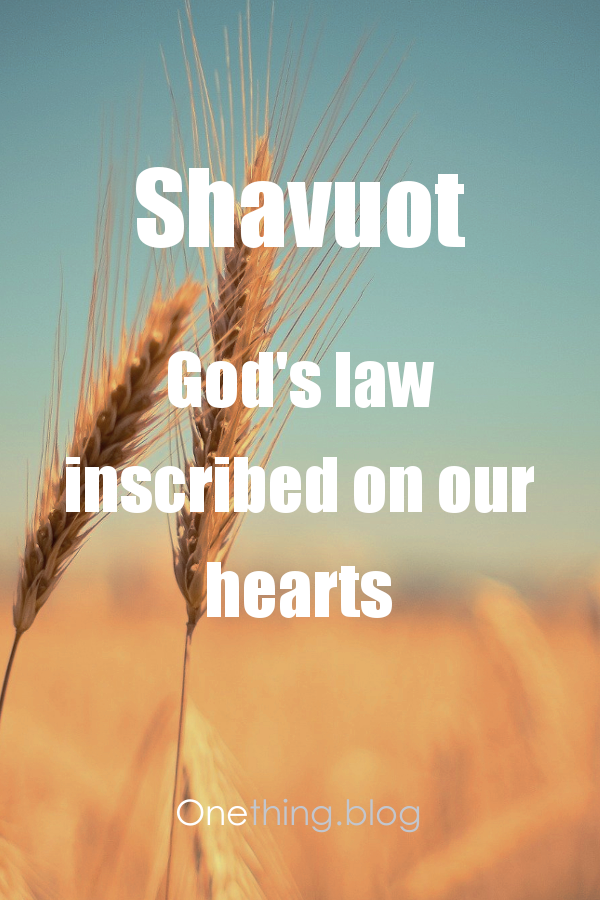 Shavuot: a time for growth

Shavuot was followed by the hot summer months – a season of great heat which produced growth and maturity in the fruits of the land. Likewise, as believers we go through seasons of waiting, intense heat and uncomfortable pressure (Romans 5:3-5, James 1:2-4). If we want to follow Christ wholeheartedly, things need to change! We need to change. There is a great need for maturity and growth in our life.

Joel prophesied that the outpouring of the Holy Spirit would precede the “great and awesome Day of the LORD” – which is Judgement Day. In the Biblical calendar, the summer months ends abruptly with the sound of the trumpet on the Day of Trumpets. According to Jewish tradition, Yom Teruah (or Rosh haShana) is the Day of Judgment. This was also the Apostle Paul’s understanding: “For the trumpet will sound, and the dead will be raised incorruptible, and we shall be changed.” (1 Corinthians 15:52)

On Shavuot we celebrate that God poured out his Spirit on all people – Jews and Gentiles – and that he made a covenant with us – whether we are Jew or Gentile. As soon as we receive the Holy Spirit in our life, he begins to shape, grow and mature us, day by day, ready to be presented to the Lord on Judgement Day.

Turn your crisis into an opportunity: A crisis can empower us to make those life-changing decisions we have been putting off for so long. It can liberate us from the fear that has been holding us back.
When life doesn’t go as planned, having the right perspective is vital if we want to turn a crisis into an opportunity for growth and change. A crisis may be the end of something, but it is not the end. There is always a tomorrow. Aligning our thinking and decisions with God's word impacts what that tomorrow looks like.
Have a joyful weekend everyone❤
Yes it can. This nation is called Israel. A prophetic word from 2700 years ago was fulfilled before our eyes, 73 years ago today! Happy Birthday Israel! 🇮🇱 A daily reminder of God's enduring love and faithfulness.
God is the giver of life. He is the source of life. We are nothing without Him.
"See! The winter is past; the rains are over and gone. Flowers appear on the earth; the season of singing has come, the cooing of doves is heard in our land. The fig tree forms its early fruit; the blossoming vines spread their fragrance. Arise, come, my darling; my beautiful one, come with me." Song of Solomon 2:11-13 (NIV)