Have you ever felt as if God was absent from your life? That God has abandoned you? Maybe you have suffered abuse and people have badly hurt you. Or you currently find yourself stuck in an awful situation and there is no way out.

You ask yourself: Why does God allow that to happen to me? Is he actually there?

2.500 years ago there was a woman who must have felt exactly like that. She had done nothing to deserve this, yet her life turned into a nightmare. For many years, God seemed absent from her life.

I am talking about Queen Esther.

Have you ever heard that the book of Esther is a love story? It’s not.

Or that Esther won a beauty contest? She did not.

The true story of Queen Esther

Esther didn’t have a great start in life. Growing up as a foreigner in a society without anti-discrimination legislation, Esther was orphaned at a young age. Her prospects in life weren’t great. But she probably never expected what happened next.

King Ahasuerus, the despot ruler of the Persian Empire whom the Bible describes as a man with a weakness for wine and flattery and who suffered from mood swings (see Esther 1:10; 2:12-21; 3:15; 7:7) When Ahasuerus was in need of a new wife (a primary one, as he already thousands of concubines) he took to some very unusual means of “dating”.

Ahasuerus had hundreds of beautiful girls abducted. They had no say in that. One day without warning, they were just snatched from their families. And then, after months of receiving beauty preparations, they were raped. One after the other. (Esther 2:12-14)

The morning after, they were sent into the king’s harem. Here, they lived with other women like them: taken by force, considered the king’s personal property, without any rights and without hope of ever returning to their families.

Just like in those epic 20thcentury blockbuster movies, the concubines in Ahasuerus’ harem lived in a luxurious palace and looked stunning – always ready to appear in the king’s bedroom. But they must have been deeply unhappy.

Why does God allow this?

Only by the mercy of God was Esther spared that hopeless fate. But when Esther was made queen, she did not regain her freedom. From then on, she lived in a golden cage.

Queen Esther lived in fear of her life should anyone ever find out her true identity: that she was a Jew! Just like her predecessor, Queen Vashti, Esther could lose the king’s favour and be replaced with another woman. (Esther 1:19; Esther 2:10+20)

The book of Esther is one of two books in the Bible that never mention God. And that reflects what Esther must have thought: God was absent. Surely, God had forgotten about her. He was busy elsewhere and had no time for that one young woman. Or God just didn’t care. 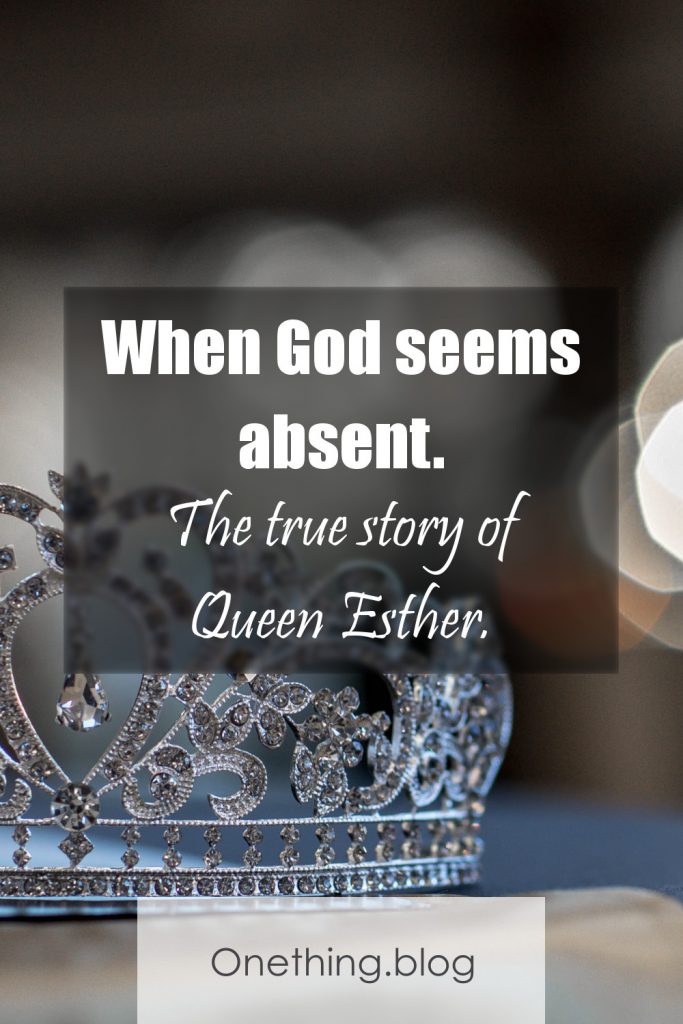 Growing up in Mordecai’s house, Esther had learned about the God of Abraham. Mordecai probably had told her about Moses and David and Deborah and all those heroes of faith.

Maybe Esther had heard of Daniel who held on to his faith without compromise when he was brought to King Nebuchadnezzar’s court. (Daniel 1:8ff)

But in the palace of Shushan, Esther took on a false identity. She very likely pretended worshipping a foreign god in disguise of her Jewish identity.

Esther must have felt very much unlike those great men and women of faith.

Maybe the devil tormented her with feelings of false guilt: “You’ve betrayed your faith! You’re a disappointment to your God. He’s done with you.”

With no one to turn to, no one to talk to and no one to encourage her, Esther kept all her questions, doubts and fears buried up inside.

What Esther did not know, was that she was about to become the Jewish people’s greatest heroine!

For such a time as this

The day came, when it all became clear.

God was not at all absent. He had been pulling the strings behind the scenes and was preparing for the greatest show-down the world had ever seen.

When Haman, the Antisemite, plotted to annihilate the Jewish people, it was an unfair match. The Jews were outnumbered in the vast Persian Empire stretching from Ethiopia to India. They were trapped, without protection and without political influence. Haman, on the other hand, was the king’s confidant. (Esther 3:6-15)

But Haman didn’t know who he was up against. His hatred had blinded him to the truth that “He who watches over Israel never slumbers or sleeps.” (Psalm 121:4, NLT)

And while Haman was working on his devilish plan to annihilate the Jewish people, God was just waiting to mobilise his “secret agent” which he had positioned many years before: Queen Esther.

“Who knows whether you have come to the kingdom for such a time as this? (Esther 4:14, NKJV)

This was it. For years, Esther had been unaware of what was going on. But when her time had come, Esther stepped up: “If I perish, I perish.” (Esther 4:16)

Women of the Bible

Each year on Purim, the Jewish people celebrate their rescue through Queen Esther.

But Esther did not climb a social ladder. She didn’t decide one day to be queen or to be the saviour of her people. She did not strive to become a heroine.

I find it intriguing that the great women in the Bible didn’t set themselves goals to one day achieve “greatness”. They didn’t climb the social ladder. Many of them experienced hardship and pain.

Miriam was a slave who suffered beatings and years of hard physical labour. Ruth was a widowed foreigner who had to live from the local food bank (in case you didn’t know: this is what “gleaning” was!). Abigail was stuck in an unhappy marriage with a foolish, arrogant, ill-tempered man.

So, whatever you are going through and may have been for many years, remember Queen Esther! You may think that God doesn’t care about you or that he never actually has. Just like Esther, you may think God has been absent your entire life.

But he is not! Don’t lose hope.

God is the giver of life. He is the source of life. We are nothing without Him.
"See! The winter is past; the rains are over and gone. Flowers appear on the earth; the season of singing has come, the cooing of doves is heard in our land. The fig tree forms its early fruit; the blossoming vines spread their fragrance. Arise, come, my darling; my beautiful one, come with me." Song of Solomon 2:11-13 (NIV)
If we're in Christ, our old sinful self has been crucified and put to death with him. Our past cannot haunt us any longer, it's over. Our sinful nature has no more power over us, it's dead.
"Where, O death, is your victory? Where, O death, is your sting?" The sting of death is sin, and the power of sin is the law. But thanks be to God! He gives us the victory through our Lord Jesus Christ. 1 Corinthians 15:55-57
Christ has done it.
This is the day that the LORD has made - let us rejoice and be glad in it!