Is forgiving yourself biblical? Yes, it totally is. What may sound selfish and opportunistic is actually necessary to serve God in our calling.

Jesus came to give us abundant life.  He came to set the captives free and that includes people who are prisoners of their own past.

What does the Bible say about forgiving yourself

The Bible teaches us that just as God forgave us, we need to forgive ourselves. A great example of self-forgiveness is the Apostle Paul.

Paul had persecuted the early believers with a passion (Acts 9:1 says he “breathed threats and murder” against them). He had caused great suffering and maybe even the death of many.

“But Saul was going everywhere to destroy the church. He went from house to house, dragging out both men and women to throw them into prison.” (Acts 8:3, NLT)

But then he encountered Jesus on the road to Damascus, was saved and became God’s greatest instrument to advance the Gospel at that time. Paul was of the sect of the Pharisees, a student of the famous scholar Gamaliel.

In the New Testament epistles, Paul in great detail explains how Jesus fulfilled the Old Testament prophecies. It is thanks to Paul’s thorough knowledge of the Hebrew Scriptures that we today can understand the foundational truths of the New Covenant, e.g. that salvation is by faith alone and that we are no longer under the Mosaic Law.

But Paul was only able to fulfil this wonderful task because he chose to forgive himself. In Philippians 3:13-14 he says:

Is forgiving yourself biblical

Had Paul not forgiven himself, he probably would have stayed in Damascus. Ashamed of his former zeal to persecute the believers in Jesus, he could have chosen to “keep a low profile” and vanish into oblivion. He could have opted for (false) “humility”.

Although he thought of himself to be “the least of the Apostles” – the least deserving to be called by God -, Paul accepted God’s forgiveness and forgave himself also.

Forgiving yourself for past mistakes may mean that you need to face your past, before you can move on. You may need to make amends with a friend, pay a debt or put things right.

You may be confronted with other people’s rejection and resentment and you may live with that pain for the rest of your life.

When Paul was first saved, the believers mistrusted him (Act 9:13-14). It took up to 15 years until he actually met the church in Jerusalem whom he had so furiously persecuted.

In 2 Corinthians 12:7 Paul speaks of a having a “thorn in the flesh” which God did not remove. Some Bible scholars believe this was his great emotional pain and regret over the suffering he had caused to his brothers and sisters in Christ.

If that is the meaning of the thorn in the flesh, then he did not allow his emotions to make him dwell in self-pity. Instead, as he tells the Philippians, he let go of the past and looked to what lay ahead.

Paul also could have felt feelings of inadequacy. Although he knew he was the “least of the Apostles”, he uncompromisingly stood up for what he believed in.

He challenged Peter, Jesus’ confidant who had been with the Lord for three years, and even accused him of hypocrisy (Galatians 2:11-13)! Paul stood before the church elders in Jerusalem and pleaded his case against judaising the Gentiles (Acts 15). And he boldly preached the Gospel before religious and worldly rulers (Acts 22-26).

How to forgive yourself for past sins

Bring your past sins before God

Bring your sin and failure before God. Come clean. Ask him to forgive you and he will do so.

“If we confess our sins, he is faithful and just to forgive us our sins and to cleanse us from all unrighteousness.“ (1 John 1:9, ESV)

Your past failures, your sin, has been washed away. God won’t bring your past sin up again or rub your face in it. He says he will throw all our sin into the sea and remember it no more (Micah 7:18-19; Hebrews 8:12).

But you also need to seek the forgiveness of other people. Maybe you have let people down badly. You may have cheated on someone you love, or let someone or yourself down. Maybe you did something even worse. Come clean.

Accept God’s forgiveness and forgive yourself

Accept God’s gift of forgiveness. If the holy God can forgive you, how much more should you forgive yourself!

“This means that anyone who belongs to Christ has become a new person. The old life is gone; a new life has begun! And all of this is a gift from God, who brought us back to himself through Christ. And God has given us this task of reconciling people to him.” (2 Corinthians 5:17-18, NLT)

With God’s forgiveness, you can have a fresh start in life. Christ has given you a new identity. You are no longer that person who did all those things.

Think about all the negative things you think about yourself. Write them down. And then cross them off – because they no longer describe you!

Nevertheless, may notice that you keep getting triggered. If things of the past keep coming up and seem to be repeating themselves, or if you fall again and again into those old patterns of behaviour, then you may want to seek counselling.

There is no shame in doing that and it is not a “lack of faith”. God has gifted people with pastoral care and psychological insight to walk alongside us as we grow into maturity.

In Isaiah 43:18-19 God tells us to stop dwelling on the past, and instead look at the new thing he is doing.

“Remember not the former things, nor consider the things of old. Behold, I am doing a new thing; now it springs forth, do you not perceive it? I will make a way in the wilderness and rivers in the desert.” (ESV)

Allow God to do a new thing in your life! He is an expert of turning lives around. Look at Rahab the prostitute: she let go of her past and embraced the future, and eventually, she, the former prostitute, became the ancestor of King David.

God has a plan for your life. Find out what your calling is and pursue it. Don’t devalue yourself and don’t allow the devil to tell you that you are not worthy. You were bought at a price – the precious blood of Jesus!

Paul understood that he was unable to fulfil God’s calling on his life, if he continued in remorse and false guilt. After his encounter with Jesus, and after he had been baptised, Paul dedicated his life to the new thing God was doing.

Consequences of not forgiving yourself

If we choose not to forgive ourselves, we will not be able to move forward in our calling and the purpose God has for our life. Instead, we:

The life of King David displays the consequences of not forgiving ourselves. After he had committed adultery with Bathsheba and had her husband killed, David’s children got totally out of control. (2 Samuel 12-18)

When his first-born Amnon (maybe Daddy’s favourite?) raped his half-sister Tamar, David was furious, but stopped short of punishing Amnon. Then David’s third son, Absalom, took revenge and killed Amnon. David again never punished Absalom but instead, he mourned his firstborn (who had raped his half-sister).

As the story goes on, David let Absalom have his way again and again until Absalom tried to usurp his father and is killed in to doing so.

David’s passivity may have been the result of his false guilt. Although God had forgiven him, David had not forgiven himself and therefore felt inadequate to discipline his sons (after all, they all knew what he had done!).

If we don’t forgive ourselves our life may get out of control too. We may allow others to treat us as doormats. We may feel inadequate or unworthy to take responsibility, stand up for the truth and serve God.

Unlike David, the Apostle Paul did forgive himself. He humbly accepted that the past could not be changed, but that he could choose a different future. 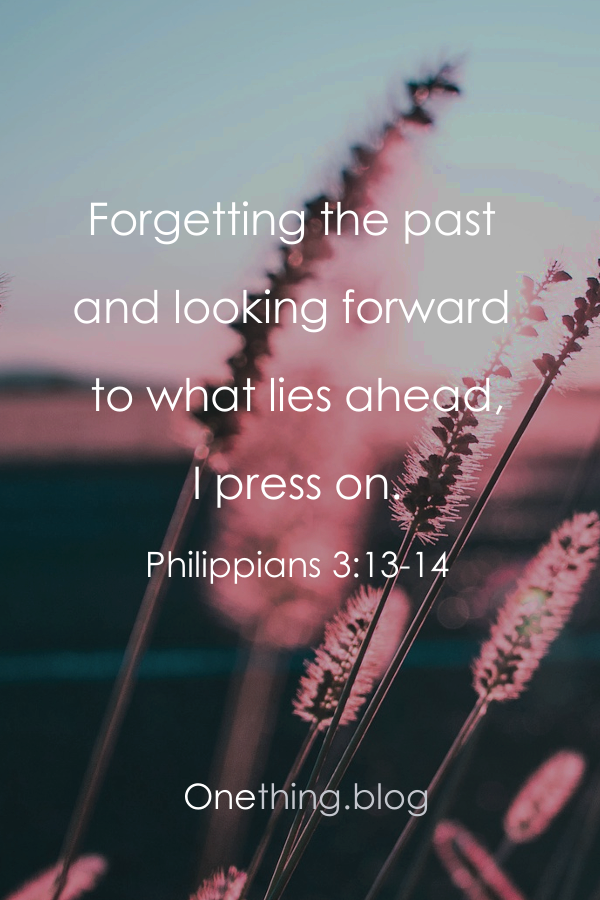 Books on forgiving yourself

A great book about the topic of forgiving yourself was written by RT Kendall. It is called “Totally Forgiving Ourselves” and is a follow up to his best-selling book “Total forgiveness” (which is a must-read!).

While “Total Forgiveness” confronts us with the painful truth that God wants us to forgive those who wronged us, “Totally forgiving ourselves” addresses regret, grief, guilt vs. false guilt, self-acceptance and other matters related to the topic.

Forgiving yourself for past mistakes

I truly hope and pray that as you research this topic more, God will reveal his great love for you. May the Holy Spirit open your heart to understand how God sees you: cleansed and declared righteous by the blood of Jesus.

God has a plan for your life, he wants to give you good things and wants to see the dreams he has placed inside of you come to pass. Your past does not determine your future!