If you have been praying for a long time and are still waiting for God to answer your prayer, do not be discouraged! Continue praying, because there is power in persistent prayer.

Persistent prayer in the Bible

“Then Jesus told his disciples a parable to show them that they should always pray and not give up.” (Luke 18:1, NIV)

In the parable of the persistent widow (Luke 18:18), Jesus teaches us that prayer is not just a one-off, ticking-a-box matter. He does encourage us that our heavenly Father will hear our prayer, but he leaves no doubt that we may need to pray repeatedly and persistently until we receive an answer to our prayer.

There actually is a much greater purpose for your prayer, that you cannot see in the visible world.

Praying persistently is not something that is natural to us, especially in our day and age when we can virtually get whatever we want, anytime, anywhere – it’s just a click away.

There are occasions where we know that we do need to make an effort. But even then, we prefer to assess the situation and then decide whether it is worth it.

Let me explain it like this: imagine you want to lose weight and join a gym. The gym instructor drafts a plan with certain exercises, a change of diet and most importantly an estimate timeframe when you would see our desired result.

Now what if instead of giving an estimate timeframe, the gym instructor told you that when you exercise regularly, the weight loss may set in after 5 months, 5 years or even 15 years, but you wouldn’t really know when to expect the desired outcome. You would probably look for an alternative, something that promises a more certain outcome (at least I would)!

There is no alternative to persistent prayer

All we have, all we can hold on to, is

(a) God’s promise that he does hear us, and

(b) his call to always pray and not be discouraged.

Why does God not give us instantly what we are asking for? Is He teasing us? Is He reluctant to bless us?

No. God wants us to persist because there is power in persistent prayer. And persistence in prayer is essential to God’s answer.

In the Old Testament, Daniel 10, we get an insight into the power of persistent prayer. The prophet Daniel writes about how he asked God for clarity about a vision he had received and subsequently prayed and fasted (Daniel 10:1-3).

After three weeks, an angel appeared with God’s answer.

“Fear not, Daniel, for from the first day that you set your heart to understand and humbled yourself before your God, your words have been heard, and I have come because of your words. The prince of the kingdom of Persia withstood me twenty-one days, but Michael, one of the chief princes, came to help me…” (Daniel 10:12-13, ESV)

God had answered Daniel’s prayer from the first day that he had begun praying. But the answer was held up in the heavenly realm. While Daniel spent three weeks fasting and in intense prayer, a battle was raging in the invisible world between God’s messenger and demonic powers opposing him.

The power of persistent prayer

This brief event in the book of Daniel gives us a clue of what is happening in the heavenly realm when we pray and fast. Ephesians 6:12 says that our battle is not against flesh and blood – not against people -, but “against the cosmic powers over this present darkness, against the spiritual forces of evil in the heavenly places.” (ESV)

Maybe Daniel hoped to have get an instant answer. The intensity of his three week prayer combined with fasting reveals Daniel had a sense of urgency – he did want an answer asap.

Had Daniel known from the outset that the answer would certainly come, but only three weeks later, would he have prayed with such urgency and intensity? Probably not.

I think it was precisely because Daniel did not know, he prayed so intensely. And his persistence in prayer then turned the battle in the spiritual world in Daniel’s favour.

Had Daniel not persisted in prayer, had he said “I have said a prayer and now, God, it’s your call”, what would have taken place in the heavenly places? Would the battle have taken longer? Or would it have been “aborted” (the angel lacking “fuel”)?

Why God wants us to pray persistently

Why does God make spiritual battles dependent on our prayers? Can’t he just overrule everything and reach down from Heaven with an answer?

It is a great mystery that Almighty God chooses to make himself dependent on us. This dependence goes back to the Garden of Eden, when God gave Adam dominion over the earth. Adam became responsible for the earth.

This dominion has been passed down to us, Adam’s descendants. By developing a consistent prayer life we exercise that God-given dominion, and call on His Kingdom to come and His will to be done, on this earth.

Almighty God certainly can bypass us, but most likely He will not, because this is his creation order. We need to step up and be faithful, responsible stewards, do his will and build his Kingdom. 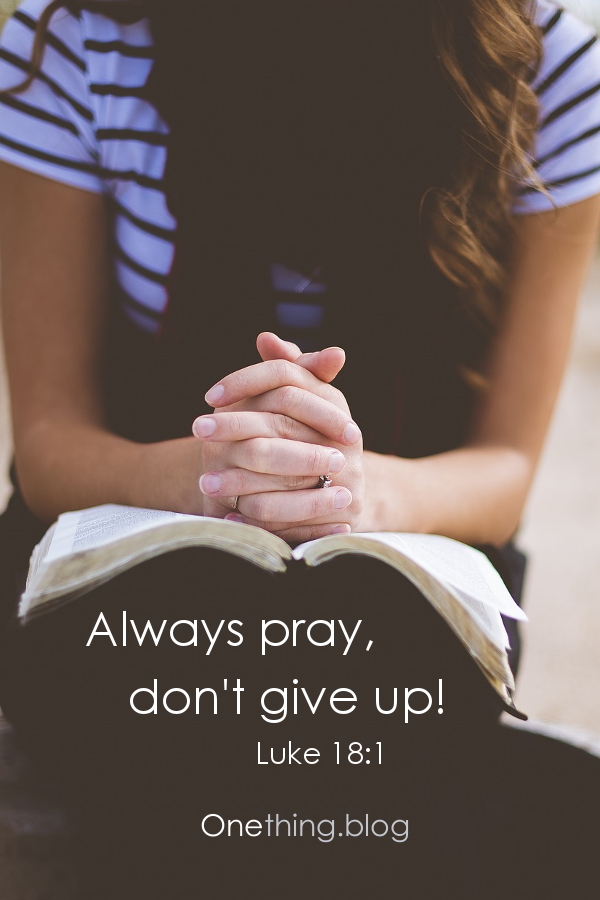 Return to the place of prayer

I hope this encourages you to take your place again in prayer and remind God again and again of your request and ask him for an answer. Don’t give up praying, even if you have been praying for a long time. You don’t know what is holding up the answer, but you can know that your prayer does make a difference.

1 thought on “The power of persistent prayer”