Anyone who desires to be successful in life, who is fed up with their own mediocrity while watching others’ success story, should learn from Olympic athletes. Even the Bible uses the image of athletes to illustrate the determination we need to fulfil our calling. Christians and non-Christians alike, the Olympics teach us a lot about success. Here’s why.

As I recently watched the world’s top athletes, in particular the sprints, and felt their triumph at their one moment in time, winning their race, I understood what distinguished them from mediocre people… like me.

I understood why they were standing on the podium, the eyes of the entire world on them, their national anthem playing, while I was… well, sitting on the sofa, in my pj, staring at a screen, knowing I could (and should) invest my time in more purposeful things.

The secret of success

The secret of Olympic gold medallists’ success is not that they are merely good at what they are doing, or particularly gifted. No. There is one more component to their success story that I have lacked in my life over many years.

The writer of the epistles to the Hebrews maybe also had the Olympics in mind when he admonished the believers to “strip off every weight that slows us down, especially the sin that so easily trips us up” and to “run with endurance the race God has set before us.” (Hebrews 12:1, NLT)

Sin means missing the mark. All throughout the Bible it refers to falling below the standard of Gods righteousness. But we can also miss the mark of the race that God set before us. The life we were born for. The purpose we are called to. The good works God has prepared for us. Just like those athletes, we can lose focus, get off track and miss God’s will for our life. 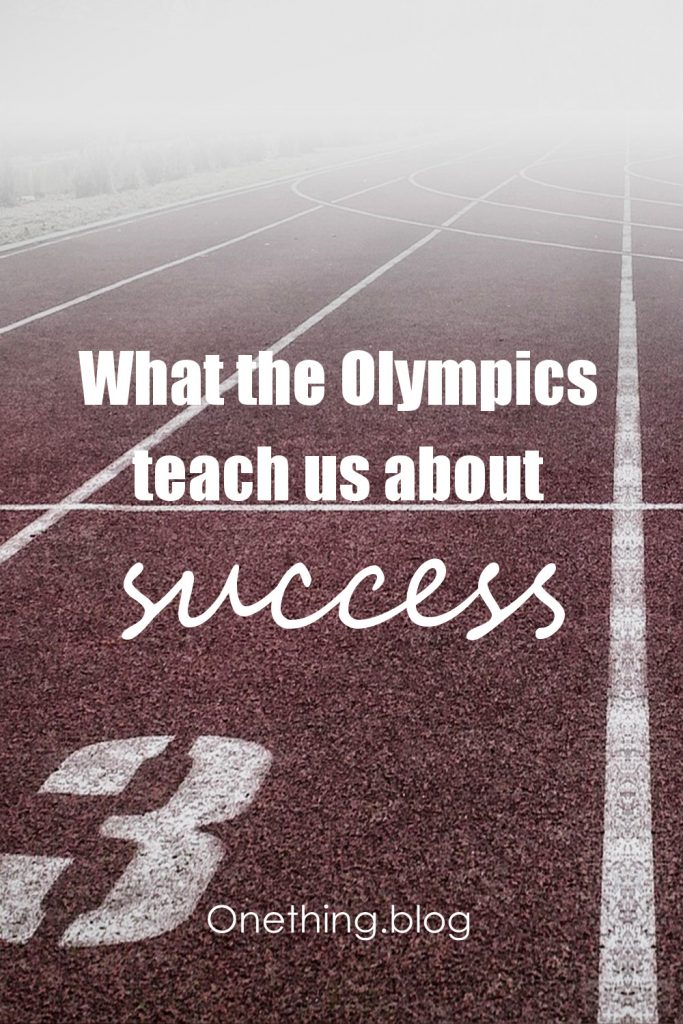 Find out what you’re best at

This is why I believe the Olympics teach a lot about success. Without knowing one of these top athletes personally, I am confident about this: they are not superhuman, nor have they come from outta space. No. Like the heroes of faith in Hebrews 11 (the chapter preceding the above mentioned verse) they are men and women like you and me.

What distinguishes them from others is that they have identified what they are best at. They may be good at many sports but they left the good things behind and focussed on what they can do best and then made it their primary goal.

The gold medallist in 100 metres sprint may be good in running 1,500 metres too. He would certainly outrun me. He may even throw the javelin a great long distance. But at some point in his life, he must have realised, that although he is very athletic and has got talent, he would not excel at other sports the same way as he does at the 100m race.

So what did he do? Set up a plan to get better at 1,500 metres? No. He stopped developing his secondary qualities and focussed on what he was best in: his speed.

Declutter and prioritise your goals

This one sport became his priority – every single day of his life. He did not allow secondary things distract him or take up his time and energy. He invested all into becoming the world’s fastest man.

I have a tendency set myself too many goals each year (or month). As it happens, many important things come up along the way, and they too need my attention. In the end, my life is cluttered with many secondary things.

These secondary things are all important. I enjoy doing many of them. I am good at them. But maybe they are not what I should prioritise. At least not for now. Not in this season.

Paul writes to the Corinthians to live their life – not aimlessly but with discipline and self-control – focussed on the prize awaiting them.

“Do you not know that in a race all the runners run, but only one receives the prize? So run that you may obtain it. Every athlete exercises self-control in all things. They do it to receive a perishable wreath, but we an imperishable. So I do not run aimlessly; I do not box as one beating the air. But I discipline my body and keep it under control, lest after preaching to others I myself should be disqualified.” (1 Corinthians 9:24-27, ESV)

Watching the Olympics, I realised that I cannot work on too many goals simultaneously. I have been doing this for too long, with the consequence of never getting any of them done. I never excel at any of them. Even worse, I am inconsistent with all of them.

So, here are five lessons the Olympics teach on how to be successful:

One day, I want to reach the finishing line and hear my Master say “well done you good and faithful servant”. I want to accomplish the tasks he has called me to do – and accomplish them well.