When should we be baptised? Can one be baptised too soon in their walk with Christ? And how do we know if we “qualify” for baptism? Maybe, after all, we aren’t “holy enough”?

Who should be baptised?

The Bible doesn’t give a clear answer to the question “when should one be baptised”. But the two main requirements for baptism – repentance and faith in the gospel of Jesus Christ – strongly indicate, that to be baptised, we must be old enough to make these two profound decisions. Babies are not!

But maybe the tougher question is: am I good enough, or even “holy enough” to get water baptised? Maybe you have once made the decision to follow Christ, and deep in your heart, you desire to make him Lord over your life. But you also know that sometimes you fail him. And you wonder, am I serious about this? Or you may doubt your salvation: Am I truly saved?

This is what I struggled with over many years. Here’s my story.

Three reasons why I did not want to be baptised

I grew up in a believing home and had been familiar with water baptism from an early age. I witnessed many baptisms and listened to people share their testimony of salvation. For them, it was such a joyful day.

And I was convinced that water baptism was the right thing to do for anyone following Christ. So why not for me? There were three reasons why I did not get baptised:

Well-meaning friends tried to encourage me. The lent me books to read, shared Scripture with me, discussed with me. The one question they often asked was “what hinders you?” (Acts 8:36-38) While I was hoping that God would speak to me and lay it on my heart personally, they told me, “it is a command, what else do you expect God to speak to you?”

No spiritual growth without baptism

They never got through to me. Nevertheless, this matter weighed heavily on my heart. Sometimes I felt anxious and hoped, that topic would not come up in conversations.

I remember a conversation I had one New Year’s Eve with a very kind pastor, the father of my friends. He wished me well for the New Year. Inside of me, I could not accept his well-wishes, as I felt I was not ready spiritually to receive the particular things he had said to me. I told him “first, there are other priorities I need to tackle”. What did I have on my mind? It was water baptism. I knew: I could not grow as a Christian as much as I wanted to, without being first baptised.

As the weeks passed, one thought suddenly crossed my mind and shook me: What if I have already missed my chance? Had God called me, and I had been disobedient? Had I already had my opportunities, but failed to see them as such? Maybe it was too late already, and no matter what I do, getting baptised now won’t have any meaning other that getting wet?

I said this simple prayer: “God, please don’t let it be too late. Give me another chance. I know you commanded us to get baptised, but please, speak to me in a personal way. You know my heart, I don’t do this to test or tease you. I just don’t want to sin.”

Baptism – A step of faith

This concern continued. A few weeks after I prayed this prayer, I went to have lunch with two new acquaintances from my church (who knew nothing about my “little secret”). While the conversation went on, a thought came to my mind: “Speak to them about baptism.” Only moments later, one of them asked me: “Are you water baptised?” I told them both my story, all the doubts I held about myself, my salvation, my sincerity.

For the first time, I felt being listened to, and not preached at. At the end of our conversation, I felt a tiny feeling of boldness inside myself. “I am going to risk it”, I said. “I will get baptised on the next occasion.” It was like Queen Esther saying “if I perish, I perish” – the doubts I had about myself were still there and I was not convinced I was doing the right thing. But I was fed up being torn back and forth. I would never know, if I didn’t risk it.

From that day, I could not think about anything else than getting baptised. It was the first thought I had when I woke up in the morning. At work, at home, out and about with my friends (non-Christian btw), I felt a strong anticipation of my upcoming baptism.

It lasted for two weeks, until at last I stepped into the tank filled with warm comfortable water and was at last baptised!

What happened after my baptism

When I stepped out of the water, I felt nothing. I had hoped to at least feel some “burden lift”, a supernatural joy or peace. But there was nothing. And for the next few weeks, it seemed nothing in my life had changed.

Three months later, I began to notice something. It was like a switch had been turned in my brain. It felt as if a fog was slowly lifting, a veil was being taken from my eyes. The Bible teaching I had grown up with, that I had read and listened to, suddenly became meaningful to me. It was like for the first time in my life I understood, what salvation by grace meant. What being made righteousness truly meant. What Jesus had accomplished for me, and what that means for me personally!

I began to soak up all these truths like a dry sponge. An excitement filled my life, about these wonderful truths I had discovered! After all, God did seem to have a plan for me!

Today I understand the deep spiritual meaning and the power of water baptism, so it comes at no surprise, that my spiritual understanding was very limited up until I got baptised.

Life did not become problem-free. And I occasionally still struggle with self-doubt or go through seasons of drought in my spiritual life. But my water baptism set a process of enormous growth in motion, which is still ongoing.

I often wonder, where I would be now, had I not taken that decision of “come what may, I am going to risk it.” It was a step of faith – faith that I belonged to Christ, even though I didn’t feel it. 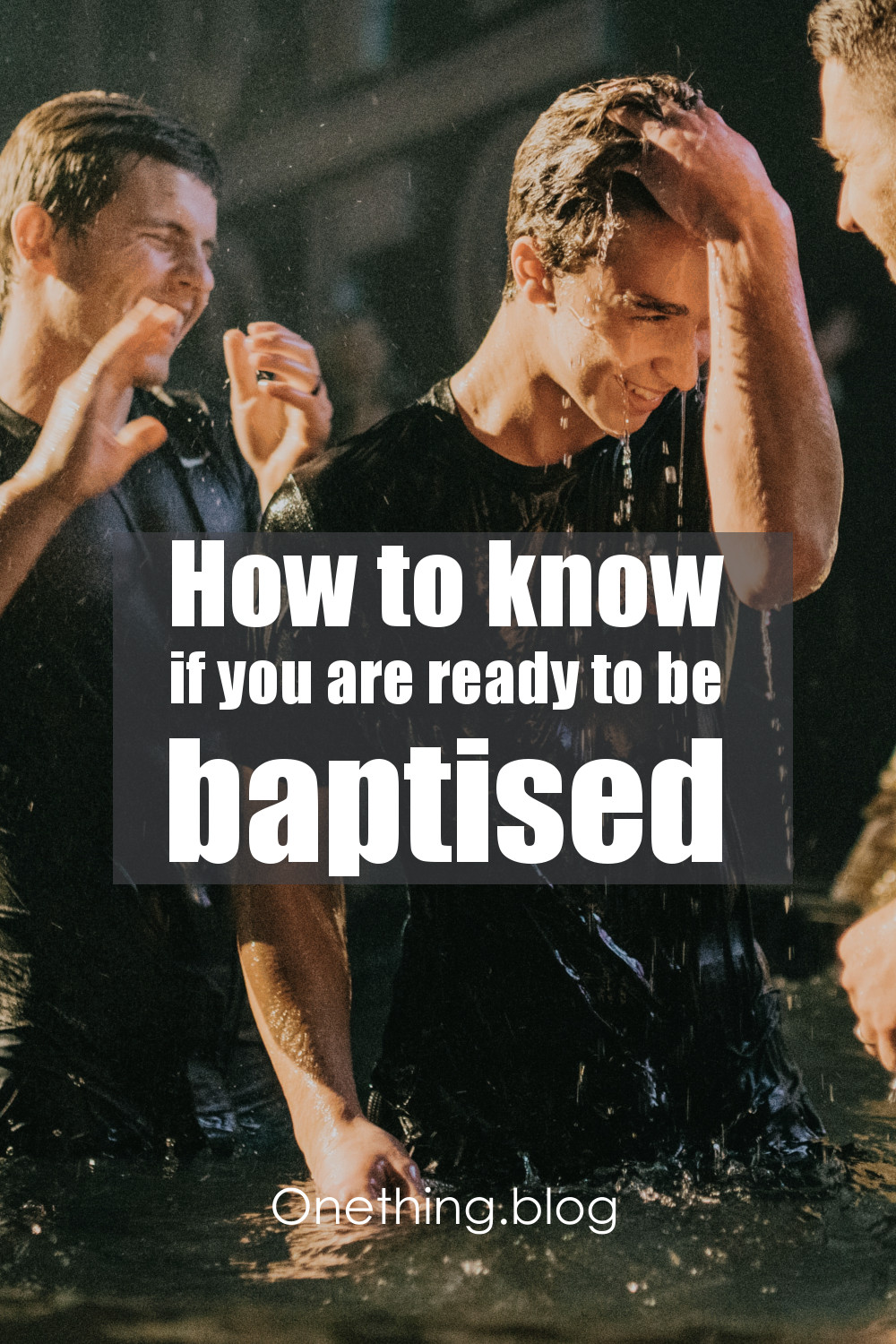 When should one be baptised?

If you are wondering whether you should get baptised, I want to encourage you, not to delay it. I don’t know your story or your personal circumstances. But if anything I shared resonates with you, if you too doubt your salvation, or don’t feel adequate, then read this:

Your salvation depends on what Christ did for you, not what you did for him. And if your faith in Christ’s death and resurrection is tiny as a mustard seed, don’t doubt your salvation! Christ can work with mustard seed-faith!

You don’t know all the amazing things God is waiting to do in your heart and life, how he wants to use you for his glory. Water baptism marks the beginning of your Christian life, not the end of your “probation period” as a Christian. With Christ, there is no probation period, as you passed as soon as you accepted him as your Saviour!